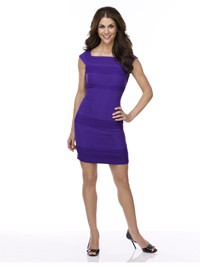 “Imagine not being able to feed your child. We can do something to help by making time in our lives to join Feeding America. We can donate our time, and our voices, to support this cause however we can, as much as we can.”

Samantha may best be known for her eight seasons co-hosting the live ABC hit Dancing With The Stars, which averaged more than 30 million viewers weekly and was the #2 most-watched show in the U.S. in each of those years. While co-hosting DWTS, Samantha was also seen on the world’s #1 entertainment news program, Entertainment Tonight, as a full-time correspondent, weekend co-host and substitute co-anchor for the weeknight editions. She has traveled the globe interviewing some of the industry’s biggest stars, including; Tom Cruise, Cameron Diaz, Russell Crowe, Cate Blanchett, Michael Douglas, Jake Gyllenhaal, Kate Hudson, George Clooney, Hugh Jackman, Kate Winslet, Anne Hathaway, Miley Cyrus, Justin Timberlake, Jennifer Aniston, Nicole Kidman, and Adam Sandler.

Born and raised in Hopkins, MN, by a rock concert promoter father and dancer mother – who together created and produced one of the country’s first Renaissance festivals, King Richard’s Faire (www.kingrichardsfaire.net) – Samantha currently resides in Los Angeles, CA, with her husband, Michael, and their two young daughters. For more information, go to www.samantha-harris.com or follow Samantha on twitter @samanthaharris.