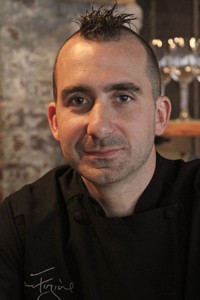 "I'm always happy to use my gifts to benefit those in need whenever I can. As a chef, I love and live to feed people which is why Feeding America is a cause that's especially close to my heart."

Winner of the Food Network’s Next Iron Chef (Season 3), Chef Marc Forgione began his career at the age of 16, joining his father, Larry Forgione (a culinary legend who revolutionized American-style cooking in the '70s and '80s), in the kitchen at An American Place. Forgione fully embraced his father's livelihood and has built on his unique culinary foundation to carve out an identity of his own.

Forgione opted for a traditional four-year education at the University of Massachusetts at Amherst, where he graduated from the School of Hotel and Restaurant Management. He spent his summers working the line at restaurants such as Above in New York, with acclaimed chef Kazuto Matsusaka. These stints would lay the groundwork for Forgione's post-collegiate toils, again alongside his father at An American Place and later under Patricia Yeo at AZ. When Yeo and celebrated chef Pino Maffeo opened Pazo, they took Forgione along to serve as sous chef at the short-lived eatery. When Laurent Tourondel set out to develop his flagship, BLT Steak, he recruited Forgione as his sous chef.

In an effort to diversify his experience, Forgione left for France, where he secured a series of humble posts under Michel Guerard in Eugenie les Bains. Working at three of the region's finest restaurants, Le Pres D'Eugenie, Ferme aux Grives and Le Cuisine Minceur, Forgione absorbed the nuances of classic French techniques and further developed what had already become a meaningful relationship with ingredients.

When he returned to New York, Forgione promptly reunited with Tourondel, who invited the now seasoned chef to serve as chef de cuisine at BLT Prime. The restaurant would go on to earn sterling accolades from relevant publications nationwide, culminating in a 27 in the Zagat Guide, making it the highest-ranking steakhouse in the history of New York City. Following his role as chef de cuisine, Forgione was named corporate chef for the BLT Restaurant Group, a position that enabled him to develop recipes and maintain the quality of the BLT brand as it went on to include more restaurants across the country.

With Marc Forgione (www.marcforgione.com),  his first restaurant, he has created an approachable place "that people walk by and are compelled to enter and where the ingredients are the star." Forgione received a Michelin star for three years in a row, making him the youngest American-born chef and owner to receive the honor in consecutive years. In addition, Forgione received a two-star review from Sam Sifton of The New York Times, earned the distinction of being named "Key Newcomer" by Zagat Guide, "Top 25 Restaurants in NYC" by Modern Luxury magazine and "All Star Eatery" by Forbes magazine. Forgione was awarded "Star Chefs Rising Star of the Year Award"; named "Rising Star" from Restaurant Hospitality magazine and mentioned "New Formalist" by Esquire magazine.