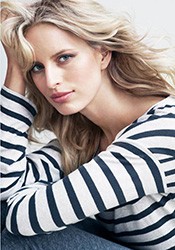 “I have a son who is 5 years old and I couldn’t imagine not being able to provide food for him.  We can’t take access to food for granted, and I am honored to be working to solve the issue of hunger so that every child, man, and woman can be fed.”

Often called one of the last true supermodels, the Czech-born Kurkova has established herself as a fashion and entertainment icon over the past decade, most notably gracing best-selling covers of fashion magazines worldwide, starring in numerous high-fashion campaigns, co-starring in a hit film franchise, and parlaying her talent into the world of fashion TV.

After being spotted by a model scout in 1999, Kurkova was signed to an exclusive Prada/Miu Miu contract. Soon after, she became the youngest model to grace the cover of American Vogue at age 16 and was lauded as the “next supermodel” by its famed editor Anna Wintour. Wintour isn’t the only one applauding Kurkova. Photographer Mario Testino has said, “The proportions of her body and her face, as well as her energy level, make her a model who could fit almost into any moment,” and designer Marc Jacobs has been quoted saying, “She has an angelic look with a dark side. She’s sweet and fun, but looks like she could be an evil bewitching child.”

The appearance on the cover of American Vogue gained her momentum as a worldwide phenomenon, with covers of French, German, Spanish and Australian Vogue, not to mention the first-time-ever series of British Vogue covers the following in close succession. Kurkova went on to grace the covers of every major worldwide fashion publication- from W and Harper’s Bazaar to Numero, international Marie Claire and i-D. In 2004, Kurkova crossed over into men’s magazines, gracing the cover of GQ’s “Summer Beach Issue”. In her first few years of modeling alone, Kurkova was featured on no less than 52 covers. Magazines know that Kurkova’s covers will sell. Her November 2011 Vogue Brazil cover was the magazine’s highest-selling issue ever. This record was formerly held by Gisele Bundchen. Kurkova has worked with the who’s who of top photographers in the fashion industry, including: Steven Meisel, Patrick Demarchelier, Ellen von Unwerth, Mario Testino, Michael Thompson, Inez van Lamsweerde and Vinoodh Matadin, Irving Penn, David Simms, Steven Klein, David Bailey, Arthur Elgort, Nathaniel Goldberg, Elaine Constantine, Richard Avedon, Herb Ritts, and David LaChapelle.

Today, Kurkova finds herself in the enviable position of being one of the most sought-after models for editorial and runway as well as mainstream and consumer campaigns. She has starred in fashion and beauty campaigns for internationally iconic clients such as, Chanel, Yves Saint Laurent, Celine, Helmut Lang, Louis Vuitton, Gucci, Dolce & Gabbana/ D&G, Versace/ Versus, Christian Dior beauty, Tommy Hilfiger, MaxMara, Saks Fifth Avenue, Anne Klein, Victoria’s Secret, Missoni, Blumarine, Giuseppe Zanotti, IWC and Jean Paul Gaultier, to name a few. She has also made over 400 runway appearances for such diverse designers like Michael Kors, Helmut Lang, Donna Karan, Chanel, Roberto Cavalli, Marc Jacobs, Anna Sui, Alexander Wang, and Calvin Klein. Kurkova was chosen to wear the $15 million jeweled Fantasy Bra for Victoria’s Secret in 2002 and she also appears in the prestigious Pirelli calendar.

In 2009, Kurkova crossed-over into the entertainment world, making her big screen debut in the summer blockbuster, “G.I Joe: The Rise of the Cobra”. She went on to guest-star on the NBC television series “Chuck” and “30 Rock”, CBS’s “Person of Interest”, and produced/starred in the 2012 German fashion reality TV series entitled ‘The Perfect Model’. Most recently Kurkova joined fellow supermodels Naomi Campbell and Coco Rocha as coaches/mentors on Oxygen’s first season of the reality series, The Face, which premiered February 2013. With Kurkova’s guidance, a model from her team went on to win the entire competition.

Kurkova has been honored for her impressive achievements, including being named one of the world’s “50 Most Beautiful People” twice by People Magazine and remains the youngest model ever to win ‘Model of the Year’ at the VH1/Vogue Fashion Awards. She received a star on the Hollywood Walk of Fame in 2007, and in July of that year, Kurkova was listed by Forbes as one of the top-earning supermodels in the world.  In 2012 Karolina was honored as "Style Icon" at the Vienna Awards for Fashion & Lifestyle. In the same year, she also received the GALA Spa Award in the category of "Beauty Idol", which was awarded by one of Germany's most popular premium people magazines. Karolina moderated the Energy Fashion Night 2012, once again proving that she's also a force to be reckoned with in the Entertainment Industry. In early 2013 Karolina released her own fragrance in cooperation with LR Health & Beauty Systems, an internationally operating company. Karolina was intensively involved in the creative process. The fragrance cooperation already earned Karolina a nomination at the 2013 Duftstar Awards in the category "Novelties - Lifestyle (Women)". The German Duftstar Award is the most distinguished award in the cosmetic industry.

More than a beautiful face, Kurkova campaigns for the welfare of children through organizations such as AmFar, New Yorkers for Children and Feeding America. She has also done work on behalf of the Injured Marine Semper Fi Fund and Wounded Warriors.

Having grown up in the small Czech town of Decin, 100 miles from Prague, Kurkova comes from a close-knit family. She credits her solid upbringing and unfailing family support as her foundation and source of her level-headedness, confidence, and self-sufficiency. Married in 2009, Kurkova and her husband, film producer and businessman Archie Drury, currently reside together with their son, Tobin Jack Drury.