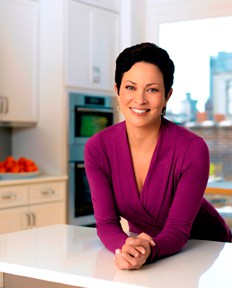 "My mission is to help people make smart food choices for a healthy life, but without access to good food, there is really no choice to make. As a mom and nutritionist, I can hardly imagine the stress and pain it would cause to not know where your next meal is coming from or how you are going to nourish your family. That's why I support Feeding America. By providing hungry people with good food, they are making a tremendous difference to their health in the most fundamental way. I am proud and happy to help in this critical cause in any way I can."

Ellie Krieger is known for her work as a TV personality on The Food Network and Cooking Channel as the host of “Healthy Appetite,” whose warmth and charisma have made her the leading go-to nutritionist, with a lifestyle emphasis, in the media today. She reaches people with her message that it is possible for anyone, given the tools and knowledge, to live life to the maximum by keeping a healthy balance and nurturing a richly satisfying and sumptuous, attainable lifestyle. She is the author of the New York Times bestselling cookbooks The Food You Crave (recipient of James Beard and IACP awards) and So Easy, as well as Comfort Food Fix. A registered dietitian, Krieger holds an MS in nutrition from Columbia and a BS from Cornell.

Today, Ellie’s extensive work in the media has earned her a loyal following and national recognition. She speaks regularly at high-profile events around the country and has appeared as a guest expert on dozens of national television programs including The Today Show, Good Morning America, The CBS Early Show, Live with Regis & Kelly, CNN, CNN HLN’s Morning Express, ABC News Now and Dr. Oz. Additionally, Ellie has been a weekly columnist for USA Today and USA Weekend, a contributing editor and columnist for Fine Cooking magazine and regular contributor to Food Network magazine. She has appeared in countless other publications including People, Self, Women’s Health, Fitness, Better Homes & Gardens, Reader’s Digest, Real Simple, More, Health, Parenting, Cooking Light, First and Prevention.

Ellie has been at the forefront of First Lady Michelle Obama’s “Let’s Move” campaign from the beginning when Mrs. Obama’s team personally invited her head up a nutrition education initiative at the “Healthy Kids Fair” at the White House in 2010. Ellie prepared a colorful array of fresh fruits and vegetables in the White House kitchen and challenged dozens of children from the community to “eat the rainbow” in produce every day; a simple and easy way to engage children in a healthier lifestyle. Ellie also participated in harvesting the White House garden with a group of school children as part of the Chef’s Move to Schools launch. She has teamed up with New York City SchoolFood where she created healthy, delicious menu items for students citywide. And she works at a grass roots level with her daughter’s New York City public school, having formed the Wellness Committee there. The school was recently awarded the Healthier US School Challenge award, the first and only in New York City to receive it.  In 2010 on behalf of the Food Network, Ellie testified before the House Committee on Agriculture about nutrition, healthy eating and the growing epidemic of childhood obesity. Ellie has also teamed up with hunger organizations such as Feeding America, Share Our Strength and City Harvest to help all people have access to good, healthy food.