When Abundance Dries Up 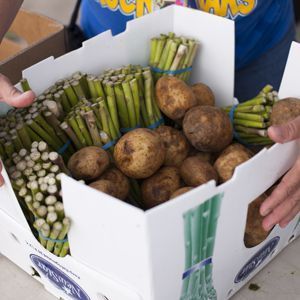 California’s Central Valley is home to some of the most productive farmland in America. It constitutes only about one percent of America’s farmland, and yet it yields an astounding one-third of all fruits, vegetables and nuts grown in the U.S.

I had the opportunity to visit the Central Valley a couple of weeks ago, and driving by, you can see the fruits of its harvest everywhere; almonds, green beans, pomegranates and plums line the roads, growing and ripening.

What’s astounding is that in the midst of this agricultural abundance, plenty of people struggle to get enough to eat. In Fresno County alone nearly 19 percent of people are food insecure. It’s often the very people who farm the land who are going without – especially lately. Because while produce peppers the land, cracked earth, uprooted trees and signs pleading with people to “pray for rain,” make it clear that this land of abundance might not be so abundant anymore.

For the last three years, drought has ravaged the Central Valley, creating an even deeper need in a community that was already struggling. Talking to residents in highly affected areas I learned that the lack of water causes a shorter growing season. Since jobs depend on farming, a shorter growing season means a shorter season of work. In some towns the drought has caused unemployment rates to skyrocket to 30-40 percent. “No water, no work,” explained one woman in the drought-ridden community of Firebaugh. “So many of us are in the same situation – we are unseasonably unemployed.”

Where there is drought however, there is also relief, thanks to the incredible work of Feeding America-member Community Food Bank in Fresno. The food bank has added several drought-relief distributions in towns hit particularly hard. At a distribution in Firebaugh, the line stretched the entire length of the park where it was taking place. Food was given at 9 a.m., but some people had been waiting in line since 4 a.m. to ensure they would get food before the food bank ran out.

That day, everyone in line walked away with boxes full of fresh produce to feed their families. It was inspiring to see how in a time of so much scarcity, the Community Food Bank in Fresno provided families with plenty. And they did it with the help of many – donors, volunteers and advocates, who support Community Food Bank and others like it across the U.S. It’s true that no one can make it rain in California’s Central Valley, but during disaster we can provide people with food and hope to get them through – to a time when the finally rain falls and brings stability back.