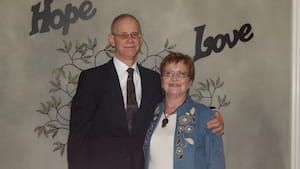 Feeding America is grateful to have spoken to Mr. Zeder about his commitment to hunger relief. Empathetic and humble, this servant leader puts faith into action, helping to feed the hungry in his community and beyond.

Steve Zeder volunteers one night each week at the St. Martin De Porres Mission Outreach Center, a member agency of Harry Chapin Food Bank in Fort Myers, Florida. At the Center, which serves dinner nightly to approximately 100 people—including many women and children in need—Steve cleans tables, plates food and assists the cook. He’s here to help in any way he can—and to hear the stories of the people served there. “It helps you feel connected to the mission,” says Steve.

Steve remembers times in his own life years ago—early in his career and with young children—when he struggled to stretch a tight budget far enough to feed his family. Things improved when he finished school and both he and his wife Amy obtained good jobs, but the memories of those hard times linger decades later as he serves people at the Center, some of whom are experiencing similar challenges.

Steve’s desire to help alleviate hunger and become a hunger-relief advocate was sparked in an unlikely place: a concert by singer-songwriter Harry Chapin. Chapin was not only a musician but also a champion for people struggling with hunger. His legendary efforts to put a spotlight on hunger through his concerts have helped change lives long after his passing—including Steve’s.

Eventually, the Zeders would help fight hunger locally and nationally. Whether sorting and packing food at the food bank, bringing food and drinks to people at the Center, or providing financial support to Feeding America, Steve states with simple conviction, “Because of my faith, it’s what I’m called to do.”

With their financial struggles behind them, the Zeders looked to the future to “decide where we wanted to do the most good. We sat down, reviewed a long list of charities and selected a few that were most important to us.” To support hunger relief long term, they named Feeding America in their estate plan and became members of the Feeding America van Hengel Society.*

What surprises Steve most about hunger? “The need,” he says. Marveling at how many pounds of food the food bank delivers or how many mobile pantries** take place, he adds, “During one mobile pantry distribution at a local school, the biggest surprise was the number of teachers’ aides who came through the line to receive food.” Today, with an even deeper understanding of hunger’s impact on his community, he states, “It helps stretch their budget.”

One person, one bag of groceries, or one donation makes a difference. Steve shows that he firmly believes this as he explains why he helps people at the Center: “As they go out into the night, you know at least they’ve had one hot meal.”

* The van Hengel Society is named for John van Hengel, the founder of the modern food bank movement, and honors individuals who make legacy gifts, including bequests and charitable gift annuities, in support of Feeding America.

**A mobile pantry is a food distribution program in which perishable and non-perishable food items are delivered by truck by a food bank. The intent is for immediate distribution to people in need in a designated area.