Looking back at Feeding America’s impressive growth during his eight-year tenure on our board of directors — the number of pounds provided to people struggling with hunger nearly doubled between 2006 and 2014 — few would believe that David Brearton had once been “new to the cause of hunger.” Working for Kraft Foods and having just relocated to Chicago, the Canada native’s only stipulation to board participation was that his efforts would help people in need. A thorough education in U.S. hunger soon followed. “Hats off to Kate Maehr, Executive Director and CEO of the Greater Chicago Food Depository,” said David, “who showed me her food bank, food agencies and areas in her region. That was the opening of ‘hunger.’ ” The biggest surprise about hunger in America? “How common it was,” said David, “Even back then the numbers were staggering.”

Reflecting on his board service, David was most excited by the Feeding America network of food banks’ innovative efforts to meet the growing demand and provide more food, from 2 billion pounds in 2006 to nearly 4 billion pounds by 2014. And of his board counterparts he is proud that they “were truly interested in people in need.” He continued, “Many members moved on and off the board, but they were 100% focused on helping the people we served.”

David’s work in hunger relief brought him in contact with a wide array of individuals, including Feeding America and food bank staff, volunteers, people in need and other board members. He commented, “All Feeding America CEOs are impressive people. They are incredibly passionate and dedicated to the individuals they serve.” One stands out in his mind: Of former board member Jan Pruitt, he said, “Jan was a classic CEO. Nothing was artificial. She dedicated her life to hunger relief and led a progressive food bank. If any need arose, she would meet that need in any way possible.”

Looking ahead, David is optimistic about the future of hunger relief, citing Feeding America’s successful efforts to secure more produce and rescue more food from restaurants and related channels. In bringing awareness to the issue of hunger, David said Feeding America “communicates people’s stories and brings hunger to life. We are telling the story better and are helping the nation understand that hunger is real, that these are real people.”

Now retired from his 30-year career in finance, culminating in the CFO position at Mondel&emacr;z International and Kraft Foods, David continues to support hunger relief through financial donations and his role as co-chair of Feeding America’s emeritus board of directors. Feeding America is incredibly grateful for David’s board service, his commitment to hunger relief and his strong leadership during key organizational transitions including the name change from America’s Second Harvest-The Nation’s Food Bank Network to Feeding America in 2008. 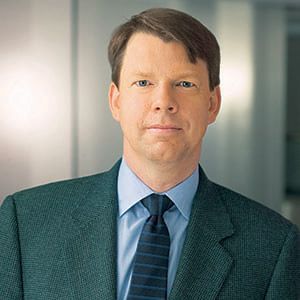