In order to address the problem of hunger, we must first understand it. Every year, Feeding America conducts the Map the Meal Gap study to learn more about hunger at the local level. By understanding populations in need, communities can better identify strategies for reaching the people who most need food assistance.  In response to COVID-19, we also released a companion study and interactive map that illustrate the projected impact of the pandemic on local food insecurity in 2020.

To accurately estimate the number of people who may be food insecure in every U.S. county and congressional district, Map the Meal Gap uses publicly available state and local data from the U.S. Census Bureau and Bureau of Labor Statistics on factors that research has shown to contribute to food insecurity. These factors include unemployment and poverty, as well as other demographic and household characteristics. In addition to measuring how pervasive the need is, the study also estimates the cost of a meal, and the amount of need among people who are food insecure, using local data from Nielsen and national survey data from the Census Bureau. 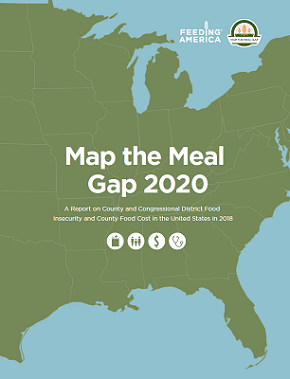 From 2013 - 2019, Feeding America released an annual Map the Meal Gap report that featured data on both child and overall food insecurity.

In 2011 and 2012, Feeding America released separate Map the Meal Gap reports for overall and child food-insecurity.