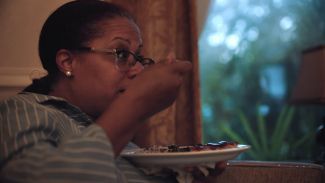 Terri Champion is an author. A singer. A scholar. She has two master’s degrees. And she is hungry.

Originally from Philadelphia, Terri moved to Florida after her mother, who she was caring for, passed away.

She went with the promise of a job, but it fell through. Then another opportunity fell through. With very little savings, Terri found herself in an unfamiliar position.

“I never thought of myself as someone who needed to visit a food pantry,” she said. “But not knowing if you’re going to eat is probably the worst feeling I’ve ever dealt with.”

So, she visited the food pantry at Woodland Community Church in Bradenton, Florida. It changed her life.

“Because I’ve never had to ask for help, it showed me that it’s ok to not be ok,” she said.

At the pantry, a partner of Feeding Tampa Bay, a member of the Feeding America network, Terri got the food she needed to help stabilize her life. Without worrying about what she had to eat, she was able to focus on finding a job – which she did.

“The pantry helped me immensely,” she said.

Now, Terri is still getting back on her feet. But while she does, she’s been busy. She’s writing a book about her life. She sings at a local church. And she is also giving back. She volunteers at the pantry that once helped her as much as she can.

And even though Terri calls the last few years “a storm” that she’s still working to get out of, she knows there’s hope now.

“There’s definitely light at the end of the tunnel,” she said.

Terri's great life suddenly vanished when her job disappeared and she needed help from the food pantry at her local church. Now that she's back on her feet, she's a regular volunteer at the pantry that helped stabilize her life.