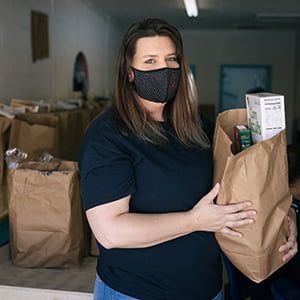 Sally and her staff of four were preparing for a contactless distribution, serving Native American families in their community.

Prior to the Covid-19 pandemic, they served up to 35 families each month. Today, their outreach is ten times that.

When Sally joined the food bank in 2018, she wanted to help her tribe. One in four Native Americans is food insecure, and Monacans, she said, have long been discriminated against in rural Amherst County.

But she also wanted to use the food bank to build community and understanding for everyone. After all, Sally knew what it was like to be hungry.

About a decade earlier, her husband passed away, and she became the sole provider for her young son. The money she made working in childcare wasn’t enough to cover all of their bills.

Sally and her staff want to provide better quality foods to their community. Fruits, vegetables, and meats are the most common request, she said. Recently, they planted a garden and plan to distribute fruits and vegetables, including some traditional Monacan foods like Tutelo strawberry corn and amaranth.

Sally Latimer, the co-director of the pantry, joined the organization in 2018 as a way to give back to her tribe. She also knows what it’s like to be hungry. After her husband passed away a decade ago, she became the sole provider for her family. “Every time I hand a bag of food to someone, it’s me giving back just a tiny bit of what was given to me,” she said.