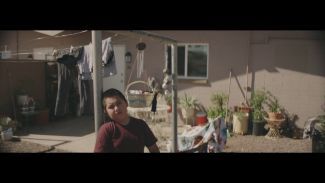 Iker (EEK-urh) is 9 years old. He wants to be a chef when he grows up.

"When I have a restaurant one day," he said. "I want to open it up to homeless people. That's what I love about sharing food: just being kind."

But before that, more than anything, he just wants to be a kid.

"I'm a kid but I don't feel like one because of how much I worry about and all the responsibilities I have at home," he said.

Iker and his siblings, 10-year-old Marilyn and 11-year-old Jose, have lived with their grandmother, Maria since they were very young. Maria doesn't work, so affording food is a constant struggle.

And the struggle isn't lost on Iker.

"I do worry about food sometimes," he admitted. "I want my family to have food in their tummies. When you skip a meal, your stomach starts hurting."

When Iker is at home, he keeps himself busy by helping his grandmother cook and clean their small apartment.

He gets up early to help out, even on the weekends.

But he also loves being at school, where his favorite subject is reading. So unlike a lot of kids, summer is not Iker's favorite time of the year. He misses school – the classes, teachers, and his friends – but he also knows that summer means no free breakfast and lunch, which he normally eats in school.

Losing access to two meals a day would mean more stress and uncertainty for Iker if it wasn't for the Dysart Community Center – a partner of St. Mary's Food Bank Alliance, a member of the Feeding America network. Just blocks from their house, Iker and his siblings go to the center for breakfast and lunch every weekday during the summer.

"If they didn't give out food, we wouldn't be eating what we normally eat," Iker said. "Because what they give us is pretty much what we have. It's really hard because otherwise, we wouldn't have food."

But because of the food, Iker, Jose, and Marilyn can enjoy their summers without worrying about what they're going to eat every day. And that means Iker can focus on being a kid, while also dreaming about being a chef.​