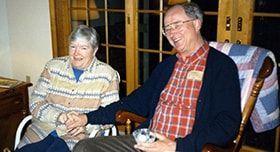 After Ellen’s recent passing, we connected with Ellen and Harold’s daughters Liz Starr and Jeanne Radday. We are honored to share Ellen and Harold’s story and are deeply grateful for the legacy of hope they provided for people struggling with hunger.

In 1961, when Ellen and Harold Radday wed, they didn’t know that their lives would take them around the world. But Harold’s Foreign Service career did just that, eventually propelling them and their three children to destinations such as Kenya, Belgium, Malta and Germany, among others. Ultimately, the couple would come back to the States, settling in the Washington, D.C. area.

Remembered as philanthropists, social justice advocates and ardent supporters of hunger relief, Ellen and Harold’s worldwide encounters opened their eyes to the devastating effects of poverty and hunger. Ellen was a “very gentle, kind rebel. She made some waves,” said Liz. Her love of people was obvious as she worked in family counseling and adoption services at Catholic Charities, a nonprofit organization, and served as a certified chaplain later in life. With deep faith and a mutual desire to serve, Ellen and Harold’s open hearts brought comfort and relief to many in their local communities, whether in the United States or abroad.

Meals and More — the Value of Social Connection

For the Radday family, meals provided the perfect setting for fellowship with others, both in their own home and the local community. “Our parents were a very hospitable couple,” said Jeanne, “Growing up, we always shared dinner together as a family, sitting down at the table together. Special occasions such as birthdays and graduations were always celebrated with a special dinner. Meals and relationship were an important foundation for a well-nourished life.”

Ellen and Harold consistently reached out within new communities and had an ability to find common ground with a wide range of people, building relationships that thrived. Very often, rapport started out “with a shared need and desire for a good meal; the rest flowed naturally from this foundation.”

Liz and Jeanne described their parents’ support of hunger relief beyond contributions. They relayed how their parents would “put aside some of our groceries and donate them to the local food pantry.” Their mother was also an active participant in the Soup Kitchen Ministry at their local church. Jeanne remembered fondly that when her own daughter Sophia was in Girl Scouts during elementary school: “My Dad took her on a service project to the local food pantry in Arlington and shared with her the experience of supporting hunger relief both by donating groceries and organizing them on warehouse shelves in preparation for distribution to the community.”

Reflecting on her parents’ experience abroad in relation to the issue of hunger, Jeanne continued, “While living in the developing world with the U.S. diplomatic mission, they saw malnutrition, and as a result, reductions in health, learning, civic engagement and human development more broadly. Our parents strove to understand this dynamic and to play a role in alleviating malnutrition and hunger.

Our parents knew about the important links between nutrition, human development and global progress — that we as living beings need to be well-nourished in order to be healthy, to benefit from education and other resources, to reach our full human potential and to thrive generally as engaged members of society.”

Feeding America is an honored beneficiary of donations from this loving couple. On behalf of the 35 million people struggling with hunger in the United States, we thank the Radday family for their legacy of giving. Their generous gifts translate into hundreds of thousands of meals for families, children and older adults across the country, bringing the people they have touched hope for a brighter tomorrow.