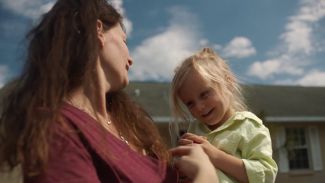 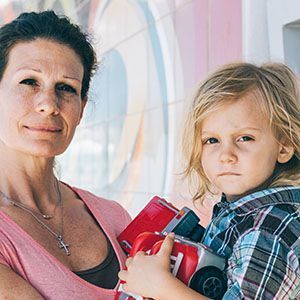 DeAdra Lee would do anything for her 3-year-old son, Dacian. Including going hungry.

“I put my son first above everything else,” she said.

Which is why she moved out of her hometown of Chicago – to get away from a difficult situation and give Dacian a better childhood.

But what was supposed to be a fresh start for the family turned out to be anything but.

Soon after DeAdra moved to Florida, she noticed Dacian wasn’t acting like other kids his age. He wasn’t engaging with people and wasn’t talking much. She took him to the doctor and got a diagnosis she never expected: Dacian had autism.

“It’s changed my life entirely,” she said. “Dacian is my full-time job now.”

DeAdra had planned to find work after moving to Florida. But because of Dacian’s diagnosis and no budget for specialized daycare, she was forced to stay home and take care of him. And with no income, DeAdra turned to a local food pantry to help feed her son and herself.

“I’d spent many days going to sleep with an empty stomach, making sure he had all the food in the house,” she recalls. “I don’t know what we’d have done without the food from the pantry.”

The program – a partner of Feeding Tampa Bay, a member of the Feeding America network – provides the healthy food that Dacian needs as he grows. And, DeAdra says, it has actually helped with Dacian’s autism symptoms.

“The healthy food we receive has helped Dacian socially and with his speech,” she said. “I see this kid emerging that I never thought I’d see. And now that chance is really there for him.”

DeAdra hopes that in a year or so she’ll be able to get Dacian into a public preschool for kids with similar developmental issues. And once that happens, she can find a job. But in the meantime, despite all the challenges she’d had to overcome since moving to Florida, DeAdra wouldn’t change anything.

“Dacian has been my strength. Him and I, we’re a great team.”

DeAdra wants a better childhood for her three-year-old son with special needs but can't always put food on the table while caring for him full-time. With her local food pantry, DeAdra is now able to provide healthy food for Dacian and herself.