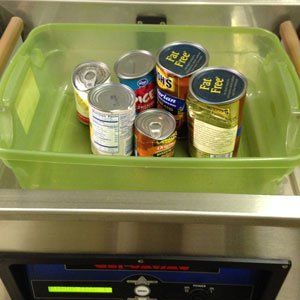 Feeding America network members have always been the kind of organizations to turn lemons into lemonade. Sometimes they do so by borrowing ideas from each other. In fact, one of the key benefits of being a member of the Feeding America network is having access to a large pool of other food banks with whom best practices can be shared. This story is about information sharing, innovation and one food bank’s quest to significantly reduce food waste.

Early in 2011, several senior staff members of Feeding America Southwest Virginia in Salem visited a handful of other food banks, including Lowcountry Food Bank in Charleston, South Carolina. Part of any food bank visit is a complete tour of the building including offices and the warehouse. During the tour, the Salem team reviewed Lowcountry’s prototype vacuum can tester which was being developed for the food bank by a volunteer who was a retired engineer. The vacuum can tester detects whether a canned food item is intact, and hasn’t lost its seal due to pin-sized holes or deep dents. Canned product that passes the vacuum test, although showing visual signs of indentations, is still fit for human consumption.

Like the majority of Feeding America network members, Feeding America Southwest Virginia obtains a large quantity of canned goods through food drives and salvage loads received through partner reclamation centers. It is very common for canned goods derived in these ways to arrive to the food bank with dings and dents. As a matter of fact, the food bank estimated that in 2010 it discarded approximately 350,000 pounds of canned product due to severe dents on the edge or lip of the can. Cans being disposed of ranged from small in size, like cans of tuna, to large #10-sized cans which are produced for foodservice entities such as restaurants and other commercial kitchens.

The network’s food safety standards and practices caution that deep and severe dents may cause a hole in the can which then could be the gateway for introducing the product to physical, chemical and biological hazards. The Salem team quickly saw that utilizing a machine like Lowcountry’s vacuum can tester could help Feeding America Southwest Virginia reduce its pounds of discarded canned product and funnel more safe, edible food to people in need.

Rather than building a vacuum test machine from scratch, the team in Salem purchased a commercially available Vacuum Heat Seal machine (Ultravac 500) through a local grant from BB&T Bank, and removed the heat sealing capability which left the food bank with a simple vacuum machine. This machine was then added as a step in the food bank’s quality assurance procedures to check every can and save product found to be intact.

The machine became part of the food bank’s warehouse operations in the fall of 2012. In year one, of the cans that did not pass an initial visual inspection, approximately 85 percent of the cans passed the vacuum test. In other words, nearly 300,000 pounds of product that would have previously been discarded for visual reasons, were saved.

With this “can do” attitude, not only is Feeding America Southwest Virginia ensuring that usable and desirable food reaches people in need, but the team is also reducing their disposal fees and helping divert good food from going to a landfill.

*Diana Letson is the director of product sourcing and retail partnerships at Feeding America.