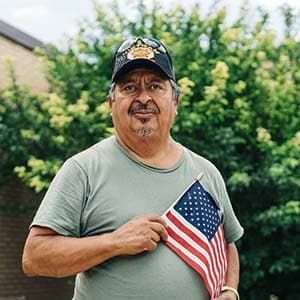 Of the households Feeding America serves, 1 in 5 has at least one member who has served in the U.S. military. In fact, more than 25% of veterans from the Iraq and Afghanistan wars face food insecurity. The Department of Veterans Affairs (VA) has launched a new program to screen all vets at its health-care facilities for hunger. Read the Article »

On food stamps and poverty: I felt ashamed buying olive oil | The Guardian

Through our nationwide network of food banks, every day we see how poverty and hunger in America often go hand in hand. 72% of all households Feeding America serves live at or below 100% of the federal poverty line, and the median annual household income of people Feeding America serves is $9,175. Yet, when Americans face poverty, it is often viewed as an individual failure, rather than a result of systemic failure. Instead of shaming people in poverty for buying brand-name food or owning a smartphone, we should address the root causes of poverty. Read the Article »

Government policies are pushing child poverty to a record low, for now | Newsweek

It’s a simple fact: A child’s chance for a bright tomorrow starts with getting enough healthy food to eat today. But in America, 1 in 6 children may not know where their next meal is coming from. Fortunately, government programs like SNAP, rental subsidies and the Children’s Health Insurance Program (CHIP) have led to a record low in child poverty — 15.6% in 2016, down from 30% in 1967. A continued downward trend depends on continued funding for programs like SNAP. Read the Article »

The new reality of old age in America | Washington Post

After a lifetime of hard work, 63% of the households with older adults (50+) that Feeding America serves find themselves facing an impossible choice — to buy groceries or medical care. As the baby-boom generation ages, the number of seniors facing hunger is only expected to increase. A new poll shows that a majority of seniors are more worried about running out of money than dying, and significantly more seniors are working now than in decades past. Read the Article »

Hunger in the News is a weekly summary of news articles that elevate the conversation of hunger and the issues affecting food insecurity in the U.S. The links contained in this summary direct you to websites that have content that is not controlled by Feeding America.