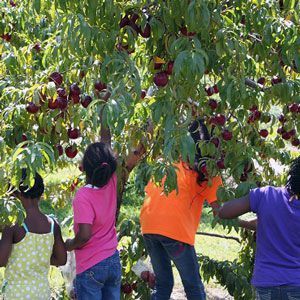 by Emily Nelson
Reviving a Centuries-Old Farm to Feed the Hungry | National Geographic
In San Antonio Texas, a unique partnership has been stuck between the National Park Service and the San Antonio Food Bank. To help revive an 18th-century Spanish mission, these partners have come together to once again bring to life the mission’s historic farmlands and in the process, help provides fresh nutritious produce to communities members struggling with hunger. Learn more about this dynamic partnership. Read the Article >>
Too Rich To Be Poor, Too Poor To Get By | Narratively
Many low and middle-income families in America earn too much to qualify for government assistance but not enough to cover their most basic needs. These families must rely on local charities and Feeding America’s network of food banks for support. Get a glimpse into the story of several families that are facing this exact struggle. Read the Article >>
Most Welfare Dollars Don’t Go Directly To Poor People Anymore | Five Thirty Eight
The welfare reform bill signed into law 20 years ago decentralized the U.S. welfare system, from one managed mostly by the federal government to one managed by individual state governments. Each state was given large discretion to decide how to spend their welfare funds, the end result being far less money going directly to low-income families than before. See where states have been directing this money to. Read the Article >>
Ending Summer Hunger | Spotlight on Poverty
In this commentary, Feeding America CEO Diana Aviv speaks on the unique challenges children and families struggling with hunger face during the summer months and offers potential solutions. Learn more about the challenge of summer hunger. Read the Article >>
Hunger in the News is a weekly summary of news articles that elevate the conversation of hunger and the issues affecting food insecurity in the U.S. The links contained in this summary direct you to websites that have content that is not controlled by Feeding America.
Share
Tweet