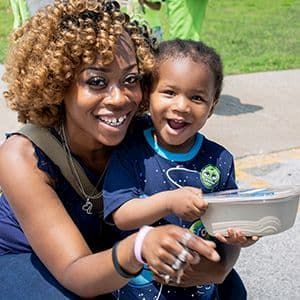 Today, Feeding America is releasing our 2016 Annual Report, which highlights our key achievements in the fight against hunger in 2016 thanks to the support of extraordinary people like you. I had the privilege of spearheading the creation of the Annual Report, and in the process, learned some amazing things about our nationwide network of food banks that are featured below and in the report. 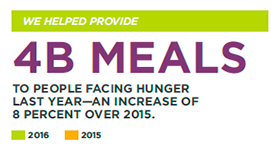 Feeding America helped provide an incredible 4 billion meals to Americans facing hunger in fiscal year 2016. This figure includes food donations from companies and farmers, food purchased with SNAP (also known as food stamps) based on Feeding America outreach, food purchased by food banks and commodities provided by the federal government. Feeding America sourced more food than ever before and delivered it to people in need across the nation.

Feeding America rescued 2.8 billion pounds of food last year, taking in food donations from manufacturers, farmers, supermarket retailers, restaurants and many others. By growing relationships with new and long-standing partners, we helped tackle the dual problems of food waste and hunger in America.

People facing hunger need the right kinds of foods to be healthy and strong. Feeding America conducts research to learn more about the best ways to fight hunger – including how to encourage people to eat more nutritious foods. Last year, the Nutrition Nudge Research Study determined that nutritional nudges, including signs and product placement, encouraged more people to choose healthy foods and increased the number of healthy foods people chose at food pantries.

As part of Feeding America’s commitment to building capacity across the network, a record $50 million in grants were provided to member food banks in the fiscal year 2016. These funds offered food banks the opportunity to grow their operations in high-need communities, enhance their hunger-relief services and move closer to realizing their goals.

Amazingly, Feeding America channeled 98 percent of donations received last year into hunger-fighting programs and services. The majority of these funds were devoted to securing meals that were delivered to 46 million Americans struggling with hunger.

These are just a few of Feeding America’s key accomplishments from 2016. To learn more about our recent initiatives and milestones, read the 2016 Annual Report.