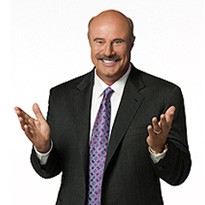 Dr. Phil has been an advocate of Feeding America & hunger relief on both his highly popular television show & website for several years.

Dr. Phil, the television personality and psychologist, has been an advocate of Feeding America and hunger relief on both his highly popular television show and website for several years. Through his syndicated daily talk show, Feeding America has been featured in special on-air and online promotions during Hunger Action Month, for child hunger throughout the summer months and on behalf of holiday giving. This content has raised awareness, educated the public and generated donations from his millions of viewers.