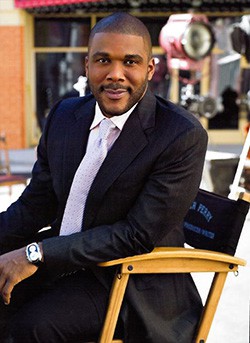 “No one should have to worry about where their next meal is coming from. That’s why I am a proud member of Feeding America’s Entertainment Council, as it’s our mission to spread the word on ways anyone can help end hunger.”

Tyler Perry is an established American actor, director, screenwriter, producer, playwright, and author. Born into poverty and raised in a household scarred by abuse, Tyler fought from a young age to find the strength, faith and perseverance that would later form the foundations of his work. Tyler started his career writing plays, many of which later became the inspiration for his film projects and included the introduction of the now-legendary Madea character, played by Tyler himself. Tyler’s first feature film, Diary of a Mad Black Woman, debuted at number one nationwide in 2005. His ensuing films,Madea's Family Reunion, Daddy's Little Girls, Why Did I Get Married?, Meet The Browns, The Family That Preys, I Can Do Bad All by Myself, Why Did I Get Married Too?, For Colored Girls, Madea's Big, Happy Family, Good Deeds and Madea's Witness Protection have all been met with massive commercial success, delighting audiences across America and around the world. He also starred in the Rob Cohen directed Alex Cross, helped release Academy Award-nominated Precious, and has a role opposite Ben Affleck in David Fincher’s forthcoming film, Gone Girl. Tyler has also made his mark in the television space, with the TBS series House of Payne and Meet the Browns, in addition to his collaborations with Oprah Winfrey on her cable network, OWN. He was recently nominated for “Entertainer of the Year” by the NAACP.