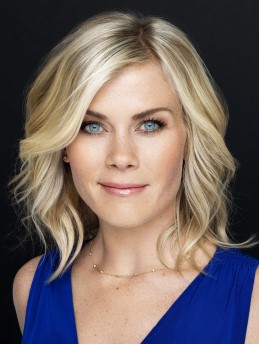 “I'm so glad that 'The Biggest Loser' gave me the opportunity to learn more about Feeding America. It is such an amazing organization, and all the people involved are doing a great job addressing the issue of hunger on all fronts. I am so honored to join the Entertainment Council and continue to give my support, any way I can.”

Sweeney is busy starring in and producing ROMCOM TV with a multitude of movies for Hallmark Channel and Hallmark Movies & Mysteries.

She also brought her Hollywood insider’s knowledge and keen sense of romance and fun to her novels. Opportunity Knocks (2016) is from the perspective of a fledgling makeup artist. Her previous novels include Scared Scriptless, with a script supervisor as the lead, and The Star Attraction, based on the story of a publicist. New York Times best-selling author Jodi Picoult described Sweeney’s book as “Great fun for any reader who secretly sneaks peeks at People magazine in the checkout line at the grocery store, and wonders, What if…?”

In addition to her fiction writing, Sweeney previously released two non-fiction books, the first of which was All the Days of My Life (So Far) in 2004. In 2010, she released, The Mommy Diet, where she revealed the “diet” of nutrition, fitness and self-care that women can follow to look and feel fantastic – before and during pregnancy, and after giving birth.

Sweeney has graced most women’s magazine covers including Good Housekeeping, Self, Shape, Prevention, Health and Redbook. She regularly appears in weekly magazines and on daytime talk shows to promote her projects and her philanthropic work as an Ambassador for Stand Up To Cancer and American Humane Association, and a member of the Entertainment Council for Feeding America.

No stranger to the camera, Sweeney began her acting at age 4 and at age 16, she joined the cast of Days of our Lives. In addition to her 21+ year career as Sami Brady, for which she earned an Emmy nomination for Best Lead Actress, Sweeney also hosted 13 seasons of NBC’s inspirational series The Biggest Loser, hosted numerous live television specials and made many guest starring appearances on popular television series.

She is married to her husband Dave, a California Highway Patrol officer, and they have two children – Ben and Megan.