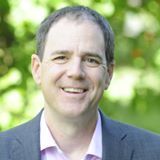 John Sayles joined the Vermont Foodbank as the CEO in March of 2009 after serving ten years in senior appointed positions with the State of Vermont - Policy and Planning Director and Deputy Secretary at the Agency of Natural Resources and Telecommunication Director and Deputy Commissioner at the Department of Public Service.  Prior to coming to Vermont, John practiced law in Maryland, both in private and government practice.  He is a graduate of the University of Baltimore School of Law and Frostburg State University in Maryland. He moved to Vermont in 1999, and lives in Montpelier.

John has been engaged in many Feeding America national committees, task forces, and working groups for over a decade, including chair of the Policy Engagement and Advocacy Committee, Vice-Chair of the Feeding America Eastern Region, and a member of the Collaborating for Clients initiative and the Ending Hunger Community of Practice. He was presented the 2012 Dick Goebel Public Service Award by Feeding America for contributions in public policy development.

Outside his responsibilities at the Foodbank, John currently serves on the boards of OneCare Vermont, The Vermont Health Foundation, and the Vermont Business Roundtable.